There’s selfish. And then there’s this.
There’s good selfish and there’s bad selfish.
Getting cold feet about your wedding, and cancelling it at the last minute, even though you are inconveniencing hundreds of people and dozens of attendants, all of whom have probably already spent a bundle of money on gifts, clothes, travel arrangements, etc., is good selfish. It’s good because you should never enter into a marriage that you are not 100% sure about, no matter what the circumstances.
Getting cold feet about your wedding, and disappearing unexpectedly, making it appear as if you’d been abducted, causing panic not only in your family but in your community and sparking a massive manhunt, is bad selfish. It’s bad because — well that’s pretty much self explanatory, isn’t it?
Pathetic.

Katie Holmes and Tom Cruise?
Speechless.
Though if I were Chris Klein, I’d be strutting around, all “Yea? So she dumped me – so what? When’s the last time your fiance dumped you for Tom Cruise?”
And what’s the deal with Tom and taller women?

This one doesn’t get easier as you go along….
http://www.sheppardsoftware.com/states_experiment_drag-drop_oneState15s_500.html
Thanks again, Jonah.

Earlier today a commercial for “Star Wars” came on, and Gnat was unimpressed. I did my Darth Vader impersonation: no impact. “But he’s evil! He used his michondian concentration for personal gain!”
“It’s just a commercial, daddy. Oh! Look!”
I froze. The Bratz are now Baby Mommaz. Yes, the hooker-in-training dolls have children. Bratz are the main reason I do not keep a supply of bricks around the house, because everytime the commercials come on I wish to pitch something kiln-fired through the screen so hard it beans the toy exec who greenlighted these hootchie toys. The Baby Bratz are as bad as you can imagine: “Bottles with Bling.” Judas on a stick, why not just refit the Bratz so they have Real Oozing Gonorreal Flow Action?
“They know how to flaunt it, and they’re keeping it real in the crib.”
What exactly is the penalty for failing to keep it real in the crib? Someone busts a cap in yo Pamper? I know I am old and so out of step it’s a wonder I don’t just appear as an indistinct smear, but was it really necessary to push the Age of Sultry Hussyism down to the infant stage? And who, exactly, are the Babyz flaunting it for? Are we going to see a commercial with Elmo in sunglasses, sitting with his legs sprawled, spanking some pliant Babyz with one hand while gumming down some mashed crack?

How did you do? Let me know in the comments.
http://www.sheppardsoftware.com/states_experiment_drag-drop_Intermed_State15s_500.html
Hat tip: Jonah.

Headline: Nick Lachey staying close to Jessica Simpson
Really? Gee – I wonder why that is. 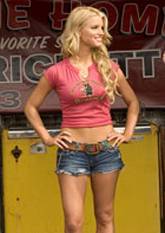 As it happens, the fam and I are going to be at MGM on the last day of Star Wars Weekends. There had better be one of these left. If there isn’t, and I find out who bought the last one…. well, let’s just say he’ll be wishing he suffered a fate as easy and painless as Boba Fett’s.

There’s a great article about Darth Vader’s appeal on MSNBC.com. What explains why he is the most enduring favorite character of the Star Wars series? Why do I, for instance, have a tiny Lego Darth on my keychain, and not a tiny Lego Luke?
O.k. That’s a bad example – Luke was a whiny little bitch, that’s why. Anyway. Lots of good observations — for instance:

Why did Darth Vader appeal so much? In a time of detente, of nuance, there was a purity about “Star Wars,” and no one was more pure than Darth Vader. He was the biggest baddest man on the biggest baddest ship in the galaxy. He wore black. He was evil, but a cool kind of evil, not like the other men of the Empire, pasty white British guys with bad haircuts and flared nostrils who bickered needlessly and couldn’t pronounce “sorcerer’s ways” correctly. No, Darth got it. The movie was about spirituality over technology, but only three people were really aware of this spirituality enough to control it, and one was wise but old (Obi-wan Kenobi), and one was idealistic but young (Luke Skywalker), while the third, Darth, was just right.

It’s a great article right until the author suddenly, unexpectedly, inexplicably, goes completely off the rails:

The rumor throughout the 1980s — as much as I cared to listen — was that Lucas was done. Three and out. Game over. “Star Wars” became less a film series than a missile defense program proposed by an actor-president to protect us from “The Evil Empire.” Even as Reagan borrowed Hollywood’s language his subordinates trashed the place, eventually branding Hollywood as “the left coast”; yet whenever they held the White House, Washington D.C. became “the right coast,” a new kind of dream factory that played on our need for good guys and bad guys, that played on our ever-growing wish for purity. Sad when George Lucas is more of an adult than the President.

Uh. Wha-Wha-WHAT? You really have to read it in context to understand how mind-bendingly out of context that paragraph is.
First of all, since when did the Reagan White House, of all administrations, bash Hollywood? That contention is beyond absurd. Second, we were the good guys and the “Evil Empire” was the bad guy. There was no grey. Reagan adopted the Hollywood term because he was from Hollywood and because, well, because it WORKED! We bought into it, and more importantly the Soviets bought into it, and it led to their demise. Reagan began the dismantling of a world superpower, and using the threat of “Star Wars” played no small part. Sounds pretty adult to me. And it has to be noted that Reagan wasn’t dealing in science fiction. The system he envisioned, though not remotely possible in the ’80′s, (it was in fact his “dream”) is being successfully tested today. That’s not fantasy, and it’s not child play. It’s Reagan’s very adult vision becoming reality. (And as an editorial aside, where in the article, much less the offending paragraph, does the author establish Lucas as an adult?)
And, for the record, the earliest reference to “the Left Coast” in Nexis is a July 1980 article (before RWR was elected) that appeared in the New York Times, and it did, in fact, refer to Hollywood. But the “brand” wasn’t applied by any Reagan “subordinates.” It was Willie Nelson.

What exactly is the point of this article about Arrested Development? There’s absolutely no news in it. It may be cancelled and it may not be. Which fans have known for a loooong time.
The article basically devolves into a summary of the season (or series? STAY TUNED! You won’t find out here…) finale. Which is a bit odd for an AP report. Do all series season finales get AP write ups?
It wouldn’t even have perturbed me except for this nugget at the end:

Sunday’s half-hour ended with scenes from the next episode, the one that would open the fall season. Devotees can only hope the optimism isn’t misguided.

First, any regular watcher of the show can tell you that the “scenes from the next episode” are fake. Always.
Second,”misguided optimism”? Is that even possible? It’s OPTIMISM – by its very nature wishful thinking. Hope. Optimism. How can it be misguided? I suppose if its based upon incorrect facts or false impressions, it could be misguided, maybe. But the article doesn’t give any evidence that there has been any indication in either direction about the fate of the show. So why call the shows producers misguided? That’s just stupid.
Especially since the previews of the next episode aren’t really previews of the next show, you idiot.

Some 40,000 people who packed St. Peter’s Square to stare at the stovepipe jutting from the chapel roof shouted, “It’s black! It’s black!” Many snapped photos of the moment.

O.k. Seriously. 40,000 people? I completely understand the outpouring of emotion following JPII’s death. And trust me when I tell you I understand people’s need to travel to Rome for the public viewing and for the funeral.
But to watch a chimney? What’s the point of that? Are there really 40,000 people who have nothing better to do? And let’s face it – they might see the white smoke first, and hear the bells before the rest of us know about a successful vote, but those of us watching on the web are going to know who it is first. And isn’t that the most important part?