No shit, guys! How the fuck do you think political appointees get their jobs? Sending a resume followed by a cold call?
How’s this for your next headline and sub-head:

Sky Is Blue
Has been for years

• Ozzfest will return to Germain Amphitheater on Tuesday.
Between the opening of the gates at 10 a.m. and the end of headliner Black Sabbath’s set, many metal bands, including one with Will Smith’s wife on lead vocals, will perform. They include:
Iron Maiden, Shadows Fall, Gizmachi, It Dies Today, Arch Enemy, Black Label Society, Rob Zombie, Killswitch Engage, As I Lay Dying, Mastodon, A Dozen Furies, the Haunted, In Flames, Soilwork, the Black Dahlia Murder, Trivium, Bury Your Dead and Wicked Wisdom (featuring Jada Pinkett Smith).

Date: June 26, 2005
Temp: 95, Humidity – 1000%
7:00 – Enter Park
7:10 – Eat @ La Rosa’s
7:20 – Walk to The Beast
7:22 – Wonder if they regret that giant Tomb Raider statue thingy.
7:23 – See The Italian Job in action for the first time. Cool.
7:30 – Ride The Beast.
7:32 – Wish with every fiber of my being that the restraint hadn’t just ratched itself down one more notch.
7:33 – Remark to self that even if Z hits 48″ this year, this is WAAAAAAAAAAY too intense for her.
7:35 – Walk to Viper.
7:37 – Lament the absence of the Flying Eagles.
7:38 – WTF? There’s just a grassy area where the Flying Eagles used to be. It doesn’t look like the Italian Job even encroaches on the space that the Flying Eagles used to occupy. WTF!
7:40 – Ride the Viper.
7:42 – Remark to self that that is one of my favorite – and in my opinion, one of the must underrated – coasters around.
7:43 – Notice that Flying Eagles would fit nicely where the stupid pay per use bungee thing is.
7:44 – Wonder if they regret putting Flight of Fear over in the middle of nowhere on the other side of the Racer, discreetly tucked away in the middle of the Midway.
7:45 – Think to self, evidently not, since it’s the first ride today with a line.
7:50 – Remark to self that FoF is a better little coaster than I remember.
7:55 – Remark to self that Flying Eagles would fit nicely where the stupid and pointless water tower decoration is in the middle of the Action Zone.
7:57 – What? Another line? This is an outrage. Decide to speak to management about the crowds.
8:20 – Ride Face/Off. Remark to self that these xeroxed Verkoma boomerangs are pointless. Make note to complain to management that they only have one train running on this ride, which creates an outrageous line.
8:30 – Note to self while exiting park that there’s room for about four Flying Eagles where the stupid fountains are just inside the entrance.
One hour, four coasters, much fun.
Now looking forward to trip South in September. Can’t wait to stop at Carowinds to ride the Flying Eagles.

The guy who got himself gunned down by London police definitely deserves a Darwin Award.

Funny that Lileks would be ranting about prudery this week. I was just talking with my sister-in-law about what I do not remember, but the conversation turned to the evolving standards of decency. (For my younger readers — yes; we used to have standards for such things.)
She laughed about how her grandfather was mortified and outraged by the Underalls commercials when they first appeared. And you remember how salacious they were don’t you? 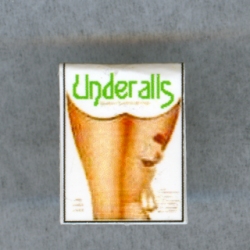 Remember how the butt would shake ever so slightly? Egads! Society, here’s the handbasket; hell’s thataway.
Aw, screw the handbasket. Just take the General Lee.

No. 1 on the list of “Reasons to willingly walk into the eye of a hurricane.” 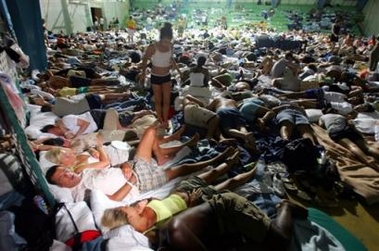 A shelter for tourists in Cancun Mexico. Not exactly the Four Seasons some of them had checked into. 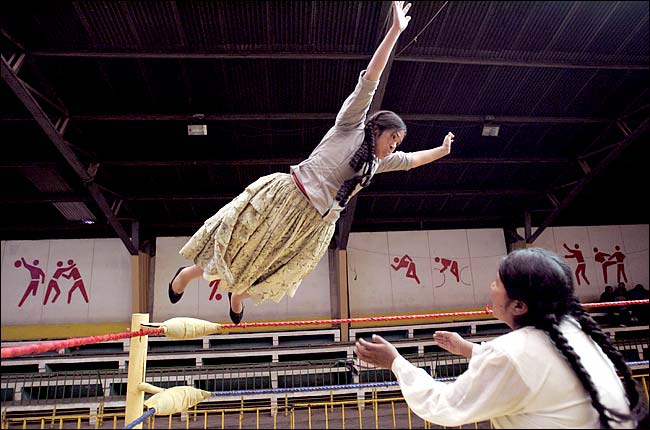 Cirque is due to roll into our humble burg next month, and as my friends who know me know, no one is looking forward to it more than I. My enchantment with Cirque is baffling, I admit, but I just can’t get enough of it. This despite the fact that is profoundly weird, really.
Bryan Curtis has a great article in Slate about Cirque’s unexplainable popularity, which he discusses in the context of the lastest touring show, Varekai:

I arrived a few minutes late and found the stage occupied by a small goat-man with forest leaves protruding from his trousers and his hair gelled into a three-point salute. “Pfffft!” he said, to much laughter. A few moments later, an angel dressed in white descended from the heavens. The goat-man regarded the angel with mock fury until the angel rose and began to perform trapeze stunts with the aid of a hammock. This seemed to satisfy the goat-man and he departed at stage right. Then there were some earthbound stunts from a troupe of flame-colored acrobats; children dressed in puffy suits as if they were about to train attack dogs, performing with bolas; then empty-eyed ogres dressed as samurai warriors and rhythmically stomping their feet. That brought the first act to a close.
Varekai was so profoundly jarring, so uncertain in its narrative intentions, that when the lights came up nobody in the audience could think to move. At least at the end of similarly exotic occasions—like a Megadeth concert or a White House press conference—the crowd knows when to get up. A small boy sitting a few feet to my right and using a voice reserved for pre-adolescent terror turned to his mother and shrieked, “What’s going on?” He spoke for all of us.

Curtis goes on to conclude that:

A great deal of Cirque du Soleil’s magic comes from its unapologetic Frenchness. Or, if you prefer, its Quebecoisity. By this, I mean that Cirque du Soleil’s shows make absolutely no sense at all. I studied the plot of Varekai for a solid hour before attending the performance, but by the end of the second act I was blubbering the same nonsense as the goat-man.

Well, I can’t disagree with any of that. But still, I do love it so.