Byron York recently criticized Bush’s five week “vacation” in Crawford, saying that politically, at least, it’s too long. But I have to disagree. I think he’s way of the mark in his criticism of Bush’s sojourn in Crawford.
York says:

Even given the wonders of modern communications which allow him to stay in touch with virtually everyone virtually all the time, does the president really need to spend five weeks of the summer based at his home in Crawford?

But it is exactly because of the modern wonders of communication that the President can and should, if he pleases, spend five weeks in Crawford. I, for one, like a President that hates Washington and can’t wait to leave. Aside from appearances (i.e. political ramifications), I can’t think of, and York doesn’t suggest, any detriment to his ability to fulfill his duties. Who cares where he does it from, other than the liberal MSM and its fans on the left?
York says there is “no doubt,” but I would counter that there is “no evidence” that even from a political and communications standpoint, the President would be in a better position to deal with the various August happenings this year if he were in Washington. But York already conceded that communications-wise there’s no disability inherent in being in Crawford. (See quote above). And policitically, if he wasn’t in Crawford, the MSM, etc. would just find some other angle to attack the President. The picture York incongruously attached to his post is the case in point. It’s being trumpted by Bush-haters as another example of Bush being out of touch — playfully playing he guitar while Katrina ravaged the Gulf coast. But whether he flew to California from Crawford or from Washington makes no difference to the left’s idea that Bush was callously indifferent to the suffering of the victims of Katrina. (And of course, the idea itself is ridiculous – the President is the President to the people of all 50 states. The idea that he should adopt some somber affect in light of the tragedy on the Gulf coast is ridiculous. Of course he’s been effected by the tragedy. But he wouldn’t be much of a leader if it paralyzed him.)
Why provide the left the aid and comfort of the imprimatur of an NR columnist for their pernicious meme that Bush is somehow failing as President for wanting to live away from Washington while fulfilling his constitutional duties? Bush’s choice to sleep in Crawford has had no demonstrable effect on his ability to do the job that we entrusted to him.

Goodbye, Maurice.
I can’t recall another single person who has made more spectacularly stupid decisions in such a short amount of time. The scope of the stupidity and the rapidity with which he sank from the next-two-time-Heisman-winner to couldn’t-last-six-months-in-the-pros is truly breathtaking.
I’d feel sorry for him if he had a single redeeming quality to feel sorry for. But he doesn’t. And so I don’t.

Anybody have any ideas? I got nuthin’ here. Haven’t seen a thing in the news that interests me in the least.
Just to fill some space and give everybody something to click on, I’ll post this again. Because it’s AWESOME.

Sometimes you have to search your heart – reach deep down inside your soul and ask yourself a question and promise to give yourself and honest answer. The question: Am I making a good faith donation to charity, or am I just trying to get rid of junk that I would otherwise have to pay to dispose of?
Everyone knows what I am talking about when I say “hobby horse” right? The plastic horse attached to a frame with springs, right?
Like this: 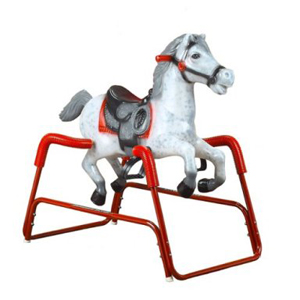 Kids love them. Mine do. They can spend minutes on end on it.
Anyway – I am sure kids who are disadvantaged would love the opportunity to own such a magnificent steed as well. Their faces probably light up like the sun on a perfect spring morn when their parents are lucky enough to find one at a second hand shop.
So what kind of depravity must lurk in a man’s heart to do this? 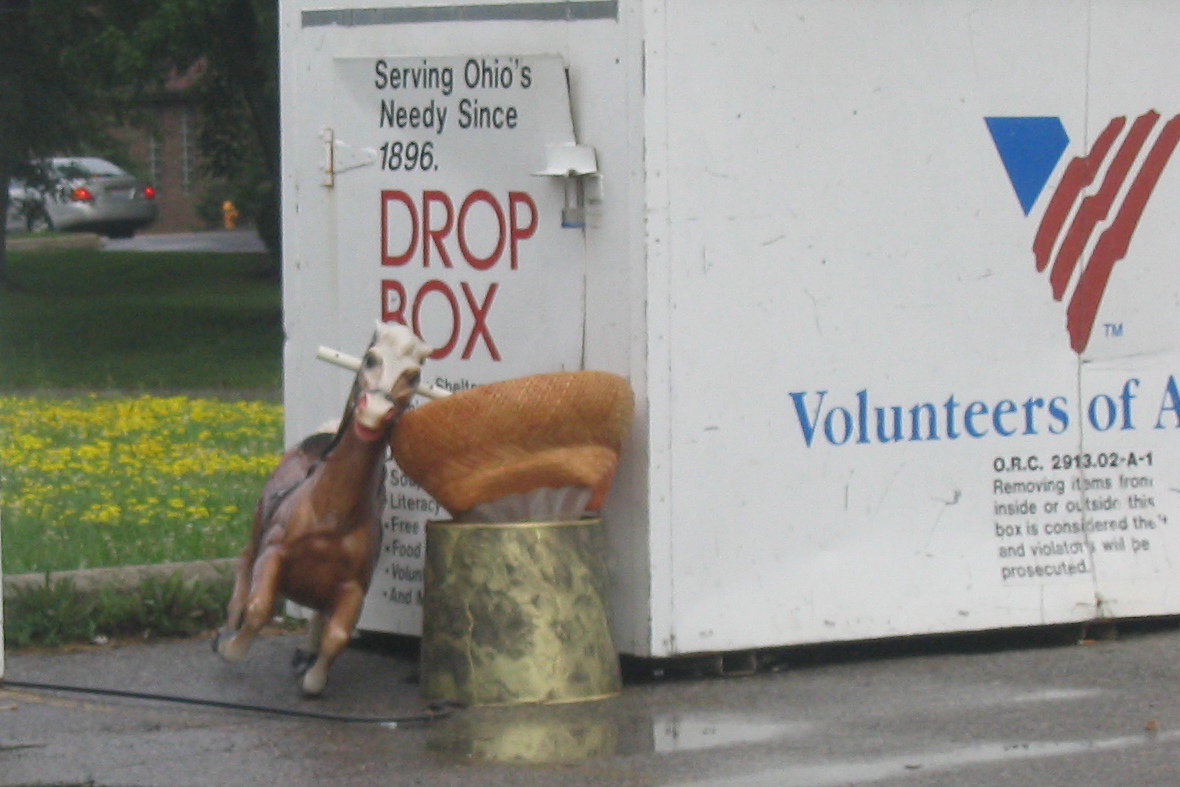 What’s a kid supposed to do with this? The damn thing can’t even stand up on its own! Unless the the kid wants to play “Afleet Alex at the Preakness” he’s pretty much out of luck, fun-wise, don’t ya think? 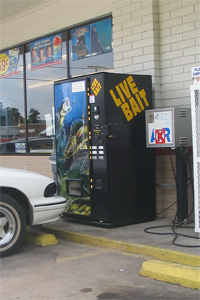 I think maybe she is! Here’s the lede in the story about LaToyia Figueroa:

PHILADELPHIA – Police discovered the remains of a missing pregnant woman and quickly arrested the father of her unborn child Saturday, ending an exhaustive, monthlong search.

District Attorney Lynne M. Abraham said Stephen Poaches would be charged with two counts of murder and related offenses for the deaths of 24-year-old LaToyia Figueroa and her fetus.

If you are going to get your picture taken with a Siberian Tiger, I think you have to assume some risk.
This girl rolled the dice and lost. The prop I had in my senior pictures was a golf club. I survived. Her prop was a man-eating predator. She didn’t.
So you plop prey down next to a carnivore predator. What did you expect to happen? Why did the Tiger have to die? What did he do wrong, exactly? I don’t mean to go all PETA here, but killing the Tiger in these circumstances seems wrong.

I was playing with my new Blackberry the other day, and pulled up the local radar to check the incoming weather. Up popped a full color map of Ohio, with the familiar green and yellow blobs of rain on its way across the state.
I turned to my five year old daughter and said “How cool is that? I have a picture of the current radar map here on my handheld.”
And she looked at me blankly, like “Yea, so?” And it occurred to me that she has no perspective for how amazing that is. Of course you can check the local radar with your handheld wireless device!
I didn’t get my first computer until is was 15 or so (An Atari 520ST – 512k RAM, and a blazing fast 8mhz processor, thank you very much), and I thought it was the most awesome piece of machinery ever invented. (Damn, I wish I had kept that.)
And I realize that the hand-me-down computer I gave to my daughter when she was two (!) — which I couldn’t use anymore because it was waaaaay too antiquated — was more powerful than anything NASA had to use to land people on the Moon, much less my own first computer.
When I got my computer in 1986, there wasn’t much to do with it other than word processing, basic gaming, and if you were really advanced and into exotic computer geekdom: creating BASIC programs. WOO! Good times. (I actually met Woody Hayes while attending a summer computer camp at OSU when I was in high school – but that’s another story.) Al Gore hadn’t invented the internet yet, so it’s not like I was cruising the net. The rudimentary BBS’s didn’t exactly hold my attention.
And this is all when I am already 15 years old! So, every new advance — like, say, a wireless handheld browser that displays real-time local radar — is understandably appreciated by my generation with amazement.
But my five year old rolls her eyes when I exclaim the wonders of a handheld wireless web browser.
Kids. 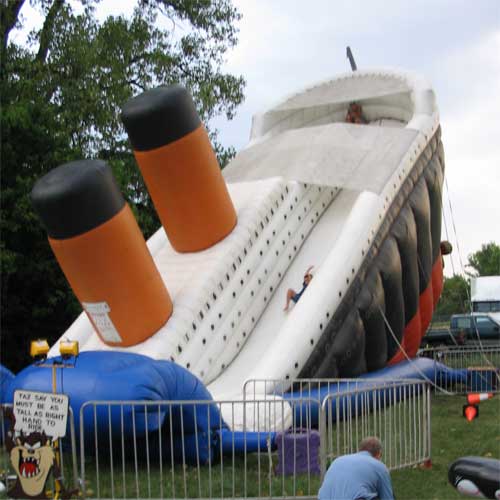 [Update: Welcome Cornerites! Stick around and browse the main page!]

I love Rome. But I gotta agree with Derb about Paris. I think my French-bashing credentials are fairly well established, but I think Gay Paris is fantastic (I also like the He-Man parts too). I’m a big fan of great cities and it’s unavoidable that Paris goes on the list. We love to criticize the French “social model” but the truth is it’s great so long as you have a well-paying job, lack initiative, love to lounge around in cafés, shop, eat well and don’t want to work very hard. That may be a terrible way to organize a society, but it’s a wonderful way to set-up an occassional vacation spot.

Kinda makes me want to visit.