It’s 5 1/2 time larger than Earth
It is 2 1/2 times farther from its sun than Earth is
Its sun is 1/5 the size of our sun, and 50 times dimmer
Its surface temperature is -394 degrees
It sports a “rocky” surface

Gee – it’s just eerie how “earthlike” it is. 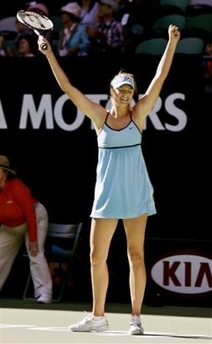 Seriously. What’s she thinking here? A MooMoo has no place on the tennis court.
Tennis, especially in Australia, can be a hot and sweaty endeavor. That’s why something like this is more appropriate: 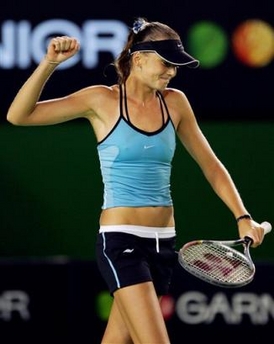 And besides, it’s smokin’ hot.
So let’s review: 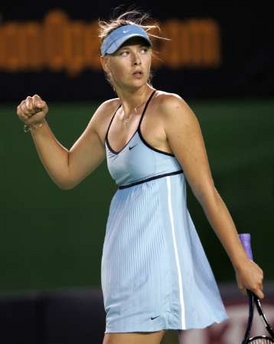 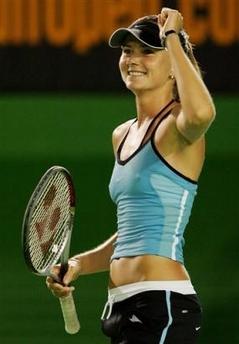 SMOKIN’ Hot.
Even Sharpova agrees; the jealousy in those eyes is undeniable: 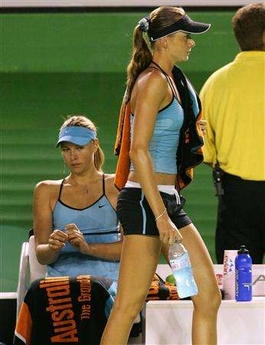 Now, I have a solution that I think could reap Maria – and professional tennis – untold millions. I think the MooMoo part of the Sharapova’s outfit should be detachable. And at some point in every match, right when she’s ready to deliver the smackdown to her opponent, she should dramatically rip of the dress, revealing a small, tight fitting two piece. Something like, oh, I dunno…..
THIS: 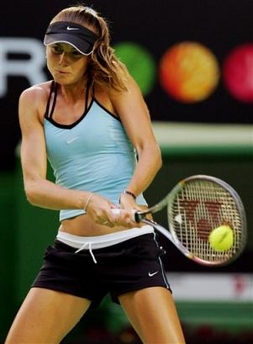 I can’t speak for all men, of course. But I for one would tune into every match.
Like I said – untold millions. Are you listening Maria?

Her description of Joe Biden:

The great thing about Joe Biden during the Alito hearings, the reason he is, to me, actually endearing, is that as he speaks, as he goes on and on and spins his long statements, hypotheticals, and free associations–as he demonstrates yet again, as he did in the Roberts hearings and even the Thomas hearings, that he is incapable of staying on the river of a thought, and is constantly lured down tributaries from which he can never quite work his way back–you can see him batting the little paddles of his mind against the weeds, trying desperately to return to the river but not remembering where it is, or where it was going.

Eloquent, biting, and most important – melodious. It just rolls off the tongue with such amazing ease. My God, what I would give to be able to construct a sentence like that. (What? You didn’t notice? It’s one sentence!) 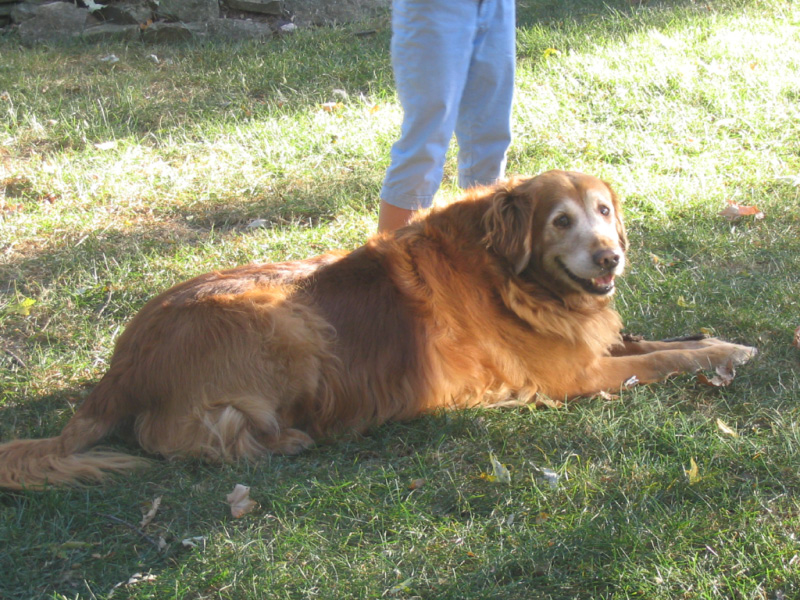 Check out this tidbit from the L.A. Times:

Publishing: Sen. Edward Kennedy (D-Mass.) and children’s publisher Scholastic Corp. will issue an illustrated book about a typical day in his life as told by Splash, his Portuguese water dog. Kennedy’s proceeds from the 56-page book, due out in May, will go to charity.

Seriously? Senator Kennedy named his dog “Splash”?? Is “Splash” really the best name for Sen. Kennedy’s dog?
Why not, instead of “splash,” which is the sound that the car carrying Mary Jo Kopechne made when it hit the water, how about “Glub, glub” the sound it made as it sunk to the bottom of the river. Or how about “Crash” the sound the car made as it jumped the curb. Any other suggestions?

If there’s anything I love more than beating the U of M, it’s beating Notre Dame. And last night, the Buckeyes didn’t just beat them, they punished them. Punished them for thinking they are back. As Mike Celizic says, not quite.
Here’s another great article from CNNSI.com. One of his most interesting observations:

Every game story will note that the Buckeyes won with big-play TDs: Ginn’s 56-yard reception and his 68-yard reverse, a play that left so many Irish defenders sprawled on the turf that I thought I was watching the climactic scene from Horse Feathers; Santonio Holmes’ 85-yard reception; and, lastly, Antonio Pittman’s 60-yard off-tackle run. What every story may not mention is that all four of those scores occurred on the very next play after the Buckeyes had converted a third-down try.

Pat Forde at ESPN.com has a great article about Smith and how OSU is aiming for a national title next year. And where will it be played?

After shredding the Fighting Irish, Smith was asked whether he knew where the ’07 national title game will be played.
“The national championship game is here next year,” Smith said, on cue, then smiled. “We like that.”
The Buckeyes have to love that. They own the Valley of the Sun in a way the Cardinals and Sun Devils can only dream of.

I love that line.
Charlie “The Genius” Weis takes some pretty serious criticism in the Chicago Tribune.

A coach’s preparation is a key to any big game, so if Weis is to be given credit for the Irish’s many successes, he also must be accountable for their glaring gaps and lapses this time.

The New York Times also has lots of good things to say about Ohio State.
Perhaps they shouldn’t call it the Fiesta Bowl anymore. As the Wall Street Journal suggests, “Maybe they should just call it the Buckeye Bowl.”
And finally, how could I comment on the game without mentioning the unseemly Brady-Laura-A.J. triangle? From the Dayton Daily News:

“Even before Thanksgiving, when both teams had two or three games left, I said, ‘Have you heard we could possibly play you guys if we win out and you win out?’ ” Robin Quinn recalled. “And he said, ‘Yeah, there’s a rumor of that.’ I said, ‘That would be awkward because you would be sacking my son.’ And he said, ‘Yes, I would.’