Lisa leaves ‘Idol,’ and viewers mostly agree
Um, isn’t that the whole premise of the show?
Isn’t that sort of like, “Stacy fired on The Apprentice: Trump agrees” ?

A runaway train killed seven people and injured at least 11, severing some of their limbs, during the filming of a TV show in Uruguay, police said.

Keep reading to the end, so you don’t miss the part about the 3,000 schoolchildren that were watching. 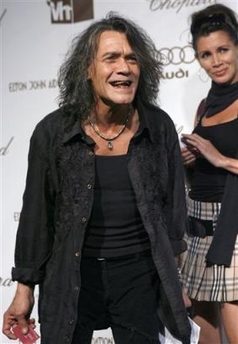 Am I so old that this is what the rock stars of my era look like now?
Oh, and Eddie? Phil Specter called and he wants his hair back.

It just occured to me that this year’s Oscar winners featured not one, but TWO Facts of Life alums.
Seriously. What are the chances of that? Hell, if you had told me that after this year’s EMMY’S that two winners were Facts of Life alums, I would not have believed it.
But Oscars? Good Lord!
Best Picture, Best Original Screenplay; Crash : Paul Haggis
Best Supporting Actor; Syriana: George Clooney
As a matter of fact, I challenge anyone out there to show me a year in which two Facts of Life alums won an Emmy in the same year. I’m thinkin’ it can’t be done.
But Oscars? 2006, chump.

This article is typical of the media’s deceit when it comes to reporting the facts of the Hurricane Katrina disaster. Headlined White House, Dems wrangle on Katrina video; Congressional leaders ‘falsely attacking’ Bush, president’s spokesmen say the article goes on to restate all of the Democrats’ falsehoods, while reporting that the White House issued a point-by-point memo refuting the Democrats.
Got that? The article repeats the falsehoods, but doesn’t report the White House’s counterpoints, just that it has some.
The most egregious of the outright lies in the article is this one:

But Sen. Mary Landrieu, D-La., said the video shows that the administration failed to prepare adequately for the possible breach of the levees protecting New Orleans.
“This administration was told what Louisiana already knew: that our federally constructed levees could certainly fail,” she said. “But these concerns, and others made by disaster relief experts, fell on deaf ears.”

Immediately after the release of the video on Wednesday, the White House and Homeland Security Department urged the public not to read too much into the footage.

When in fact, the White House’s counterpoint relies directly on the footage, which isn’t the least bit ambiguous on this very point. It isn’t just a rhetorical counter based on spin, but instead relies on the videotape itself, which completely refutes Landrieu and proves her to be a liar. To wit:

In fact, as has been reported elsewhere, the word “breach” appears nowhere else in the transcript of the videotape. Not even the spectre of a breach is even suggested, other than the Louisiana Governor’s assurances that the levees had not been breached.
Hack Job is right.